“The Revolution devours its children,” wrote journalist Jacques Mallet du Pan, who lived during the French Revolution. Its terror began by beheading the king and queen, then those accused of plotting against the Revolutionary leader Maximilien Robespierre, and near its end the mobilized mob hysteria guillotined Robespierre himself. 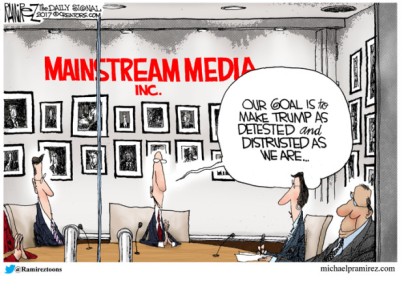 In the fanatic hate of today’s “Resistance” mobilized against President Donald Trump, which has included simulated beheadings, that same “fearful symmetry” is now emerging. Veteran Democratic politicians know it is time to move to the political center and offer realistic compromise solutions, but their core voters were mobilized by hatred against Trump and will accept no compromises. The Democratic Party’s own hate-filled demagoguery has made rational democracy impossible.

The Democrats’ comrades in the new media want leftist candidates to win, but, with delicious irony, starting on the local level such politicians now seem bent on devouring these rich media giants.

Google and its company YouTube gave massive help to Barack Obama’s reelection in 2012 and to Hillary Clinton’s failed campaign in 2016. It has relentlessly biased its media information to the left, most recently this May by identifying the “ideology” of the California Republican Party as “Nazism.”

Now under pressure from its own left-leaning employees, Google has just agreed not to renew its lucrative Artificial Intelligence contract with the Department of Defense. Its slogan used to be “Don’t be evil,” now changed to “Do the right [i.e., the left] thing.”

Walt Disney Company commanded its ABC Television to fire Roseanne Barr, star of the network’s only successful sitcom that was not wholly anti-Trump, after she privately tweeted a regrettable racist statement. But a year earlier Disney had purged veteran star Tim Allen’s “Last Man Standing,” ABC’s second highest-rated (and then only conservative) comedy show, and Allen had made no Politically Incorrect statement at all….except admitting that he went to President Trump’s inauguration. But ABC has not fired Joy Behar of its daytime show “The View” after she said on air that Christians were “mentally ill.”

Disney also owns the far-left sports network ESPN, which only weeks ago gave a new show to radical Keith Olbermann, notorious for his crazed political rants in which he has called President Trump a “Nazi” and worse. ESPN also continues to employ another commentator who has called the President a “white supremacist” on air.

We could go on with examples of unequal treatment favoring leftist views at Wikipedia, Netflix, Apple, the New York Times, Amazon’s Jeff Bezos-owned Washington Post, ABC, CBS, NBC, MSNBC, Time Magazine and its companies CNN and TBS, where B-list Canadian comedian Samantha Bee just boosted her tanking viewership by referring to the President’s daughter using a shockingly vulgar word. As the old saying goes, were it not for their double standards, the left would have no standards at all.

Such leftist media giants ignore our cries for fairness and balance as they push global socialist Revolution and try to behead elected conservatives. But now greedy leftist politicians are turning against them to feed the angry mob of welfare recipients who demand more free goodies. Always more.

In liberal Seattle, local leftists running the city government have just imposed a job-killing $275 tax each year per employee on rich local companies, including Amazon and Starbucks – forcing this tax through despite the sterling leftist credentials of these companies. Did these companies really think they would be exempt from the anti-capitalist, pro-socialist Revolution they were promoting? The Revolution sooner or later will confiscate all the money from those who have it, devouring its children.

In Silicon Valley in the San Francisco area, leftist city councils are preparing such confiscatory taxes on Apple in Cupertino, and Google in Mountain View, already targeted in Europe. Other giants such as Netflix in Los Gatos and Facebook in Menlo Park, who tilt in favor of leftist views, doubtless will soon also be tax targets.
————————————————————————————————————————————-
For an amazing interview with veteran think tank futurist Lowell Ponte, contact Sandy Frazier at 1-516-735-5468.